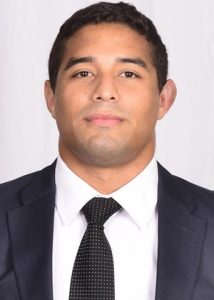 Evan started his collegiate coaching career at Bucknell in 2018 as a Volunteer Assistant. He is the current World Team member for team Puerto Rico at 97 kilos. He has placed Bronze at the Pan American Championships. He has been instrumental in the development of Bucknell’s upper weights, including Drew Phipps.

Ramos comes to Lewisburg following a successful wrestling career at nearby Shippensburg University, where he compiled an overall record of 98-17 and qualified for three NCAA Division II National Championships. Ramos twice captured All-America accolades in the 197-pound weight class, placing fourth in 2018 and fifth in 2017. The Raiders’ first two-time All-American in nearly 10 years, he was ranked as high as No. 1 in the country entering the 2018 NCAA Championships.

Ramos graduated in 2018 with a bachelor’s degree in criminal justice. He is married to Alicia Colon, who graduated with her bachelor’s in psychology from Georgian Court University and obtained her master’s in social work in May 2019 from Shippensburg.