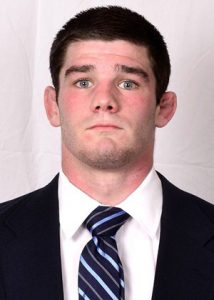 Smith, who graduated from Bucknell in 2018 ranked ninth in program history with 107 career victories, was the head wrestling coach at the United States Military Academy Preparatory School from 2019 to 2021. While at West Point Prep, he also served as the Director of the West Point Regional Training Center, working in tandem with the Army West Point coaching staff.

During the 2018-19 campaign, Smith was an assistant coach at the Virginia Military Institute. That season, Neal Richards was named the Most Outstanding Wrestler of the Southern Conference Championships after winning the 174-pound title; Richards also represented the Keydets at the NCAA Championships and was tabbed as the SoCon’s Wrestler of the Year.

As a Bison student-athlete, Smith worked as a camp counselor at the Bison System Wrestling Camps and the JRBOB Intensive Camps. He was also an active member of Bucknell Athletics Leadership Institute before his graduation with a bachelor’s degree in political science.

On the mat, Smith was the fifth Bison to qualify for the NCAA Championships all four years of his collegiate career and the 10th to reach the 100-victory plateau. He was a three-time EIWA placewinner at 141 pounds, taking second in 2018, third in 2015 and fourth in 2017. At the NCAA Championships, he finished one win away from earning All-America laurels in 2018 and 2017.