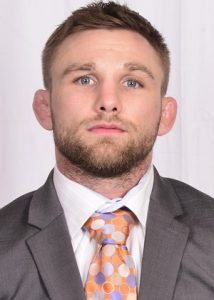 Morrill is entering his second season with the Bucknell Wrestling team. He spent the previous three seasons in the same position at Ohio University, where he helped mentor one All-American and 11 NCAA qualifiers.

In 2015-16, his first season at Ohio University, a record seven Bobcats qualified for the NCAA Championships, with Cody Walters earning All-American accolades for the second year in a row.

Ohio University finished third at the 2016 MAC Championships and fifth at the 2018 edition. The Bobcats went an impressive 13-3 during the 2015-16 campaign and, over the course of Morrill’s time in Athens, had one wrestler win a MAC title and three finish as MAC runner-up. The program also brought in its highest ranked recruiting class, with three recruits slotted in the top 100 nationally.

Before joining the Bobcat staff, Morill spent four seasons as a volunteer assistant coach at ACC powerhouse Virginia Tech. During his time in Blacksburg, the Hokies won the 2013 and 2014 ACC Championships and placed a then program-best eighth at the 2014 NCAA Championships. Morill worked directly with nine All-Americans and the first NCAA finalist in school history.

Morrill was a three-time NCAA qualifier at Edinboro University, where he graduated in 2011 with a bachelor’s degree in Health Studies. Morrill, who wrestled at 125 pounds his first three seasons before bumping up to the 133-pound weight class as a senior, posted a 90-45 record. As a junior, he compiled a 31-9 ledger and was ranked as high as fourth in the country. As a senior, he went 24-10, won an Eastern Wrestling League title and qualified for the NCAA Championships at his new weight class. He also placed second at the EWL Championships as a sophomore and fourth as a true freshman.