Shane Riccio is the inaugural President of the Buffalo Valley Regional Training Center. As president, Shane has overall responsibility to the success of the mission. He plays an active role in fundraising for the BVRTC and oversees the fundraising support board recently launched in August of 2021.

Riccio received his bachelor of science degree in accounting from Bucknell University, where he also co-captained the wrestling team his junior and senior years.

Shane is a 2010 Graduate of Bucknell University, was a three time NCAA Qualifier and Captain his Junior and Senior years.

Michaels is actively involved with several organizations and programs throughout his community.  He currently is the President of the Spreading Antlers Children’s Foundation, a Board of Trustee on the Selinsgrove State School along with serving on several other Board of Directors and advisor committees.  Michaels is the Head High School Wrestling Coach at the Lewisburg School District.

Michaels received a Bachelor of Science degree from Susquehanna University and the AACSB accredited Sigmund Weis School of Business with an emphasis in Marketing.  He is a graduate of Leadership Susquehanna Valley and Mid-Atlantic Commercial Lending School.  Michaels has been coaching wrestling for 20 plus years guiding youth travel teams, Junior High teams and High School Teams to league, tournament and district championships and top 8 finishes in the PIAA.  He has been recognized by his peers as the District 4 Coach of the Year 7-times (5-time Junior High Coach of the Year, 2-time Assistant High School Coach of the Year). 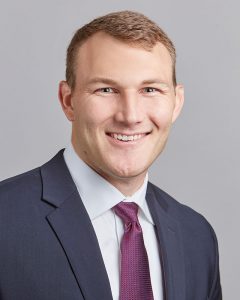 Jay Hahn is one of the founding board members of the BVRTC. As Treasurer, Jay is responsible for oversight of the organization’s finances and contracting, and supports fundraising efforts.

Jay is a 2011 graduate of Bucknell University, and was a national qualifier and team captain of the wrestling team his senior year. Jack Conroy is a native of Connecticut and a 2010 Graduate of Bucknell.  He lives in Fairfield CT with his wife Rachuel and two children. He works as a physical education teacher at Greens Farms Academy and coaches the Varsity Wrestling team while also coaching soccer and lacrosse in the middle school. In addition to working at Greens Farms Academy, he runs South Side Wrestling Club based in Bridgeport CT, and is very active with his state’s respective USA Wrestling organization.

As a high school coach, his teams have captured team New England Championships and produced numerous individual New England and Prep National Champions. In 2018 he was awarded New England coach of the year and in 2021 was voted in as his region’s representative on the National Prep Wrestling board.

In the international styles Conroy has been involved in coaching at all age levels. He has coached athletes to All-American status at every USA wrestling age level, schoolboy, cadet, junior, U23, and senior level.  He currently sits on the board of USA Wrestling CT as the state Junior Director and is the head coach of his state’s national team.

He has been with the BVRTC for one year.